A big concern right now for pecan growers is the delay in ‘Stuart’ shuck split. UGA Extension Pecan Specialist Dr. Lenny Wells has answered calls on this subject. He says, for the most part, they will. The delay in Stuart shuck split should not really come as a surprise. Stuart always has a prolonged shuck split. Stuarts never all open at once as they do for some varieties. 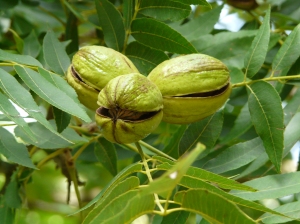 It should be no surprise that not all Stuart nuts are still not open. A couple of things have made this seem like a greater problem than normal:

Don’t expect to get all of your Stuart crop in until at least December or until we have a good rain and/or some cold weather. I think if growers look back at their records they will see that, for the most part, this is normally the case.