Here is a look at some of Brandon Barnes’s ultra-late soybeans that are looking very good. This is Pioneer 95Y70s, planted behind sweet corn on June 20th. Ultra-late soybeans can  be risky, but something to consider for income and our environment.

Planting date is probably biggest issue.Traditional research has shown that we lose 0.75 bushel/acre when planting mid June to July. UGA Agronomist Dr. Jared Whitaker says initial work in the ultra-late system is losses planting goes into August, the best educational guess as to cutoff date is first week of August.

Dr. Whitaker also likes narrow rows. This row spacing is set at 20 inches. We need to also have 175K – 200K seed population. Brandon planted at 200K seed population. A little nitrogen in this system doesn’t hurt either. Though soybeans don’t need supplemental nitrogen if properly inoculated, the window for growth in this system likely takes away ability to produce enough N. 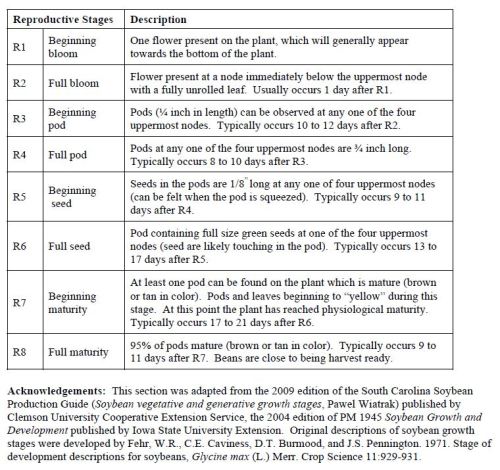 Asian soybean rust has been found in the county on Kudzu. They’ve already treated with fungicide on this field. We are not considered safe from ASR until we get to R6 growth stage (seeds are touching in the pod).

Once we hit reproductive growth, our insect thresholds change. They’ve treated for caterpillars already, but we noticed lots of leaf damage still. We can have 30% defoliation before bloom. After bloom our threshold is down to 15%. We also want to check caterpillars since soybean loopers have pyrethroid resistance. Brandon and I found some soybean loopers, but no green cloverworms or velvetbean caterpillars. UGA Entomologist Dr. Phillip Roberts says green cloverworms are rarely at high enough levels to treat. They usually appear early and serve as host for insect parasites and predators.

We can terminate our insecticide applications when we hit R7 (leaves turning yellow.)