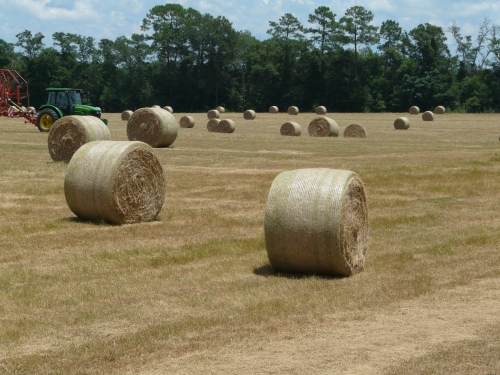 We are seeing our second hay cuttings now. We are variable in rain. This pasture has had 0.3 of rain in over a month, whereas more rain is hitting elsewhere. We dealt with some different nutrient issues at the very beginning of the season that seem to have gotten better. I don’t know if it “feels like” 102 degrees or 201 degrees. Since anything above 100 feels no different, we thought it would be a good idea to go ahead and take a forage analysis on hay cut in this field.

When it was cut, the producer felt hay looked better on one side than another. It is not a bad idea to separate samples where soil or some environemtal condition is different. Forage samples are good to do so we know what quality of hay we are feeding.We want to make sure to take samples by “lots” of hay or silage. This is hay from the same cutting, field or stage of maturity. Most cattleman purchase hay, and it is more difficult to differentiate “lots” in these samples. We separate it as best we can, and not represent more than 200 tons of dry matter.

Another important procedure is bale sampling. We need to get as much from the middle or core of the bale that we can. A hollow probe is best to use for this. I have a probe here in the office with a drill I can bring out to help sample. Here is a more detailed write up of Taking a Good Forage Sample.

We have certainly been spraying for bermudagrass stem maggot. In many cases, we are getting in the two sprays following cutting. This maybe why reports of armyworms are not high, and are not significant now.

We are also seeing some leafspot. Helminthosporium (Leaf Blight) and leaf rust is what we usually see. However, we can also have dollar spot (Sclerotinia). In either case, management is cultural. We must first have adequate nutrietion – especially potash. UGA Extension Pathologist Dr. Alfredo Martinez says, “Soil potassium is critical for leaf spot resistance. Most reported leaf spot cases are directly related to low soil potash. Nutrients are removed from bermudagrass hay fields in approximately a 4-1-3 ratio of N, P2O5, and K2O with hay harvest. That means that 75 percent as much potash as nitrogen should be applied each season. Potash can be applied in single applications in the heavy soils of north Georgia or in split applications in any portion of the state. Split applications are particularly helpful in sandy soils.”