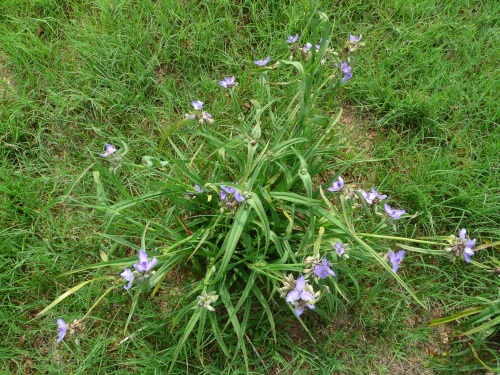 We are seeing spiderwort in pastures now. I was asked if I knew what this weed was last week. It was actually growing along the roadside where we first looked. It is in both pastures and hay fields. Spiderwort emerges in early spring, flowers in March-April, and then produces seed through mid-summer. It is an issue in grazing forage because cows avoid it. In the situations we looked at, the large, fleshy stem makes spiderwort an issue in hay production. When cut with a grass forage, spiderwort does not dry at the same rate as the grass and can cause spoilage when the hay is baled. 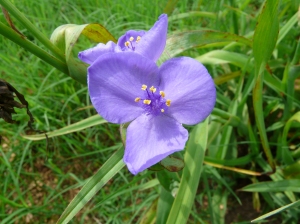 Experiments were conducted in High Springs, Florida to compare the activity of commonly used pasture herbicides on fully emerged and flowering spiderwort.  All herbicides were applied with crop oil concentrate (COC) at 1% v/v.

Spiderwort response to all herbicides was similar at 1 week after treatment (WAT) and control was less than 50% (Table 1). Triclopyr resulted in 86% control while very little change was noted from all other herbicides at 4 WAT.  Triclopyr exhibited excellent control (95%) at 8 WAT, while the other treatments remained at 50% or less.  Control of spiderwort by triclopyr began to decline shortly after 8 WAT (data not shown), and spiderwort re-established in all plots.

No single herbicide application was found to fully control spiderwort.  The greatest control was found when triclopyr was applied at 32 fl oz/acre. Canopy growth did not recommence in the triclopyr plots for another 4 to 6 weeks after the initial burn-down.  However, the majority of the spiderwort plants did eventually regrow in the triclopyr plots. Therefore, it is important to keep in mind that the results from triclopyr may be temporary. With this timeline in mind, producers should treat infested fields at least a month prior to cutting hay.  Fortunately, producers should have at least a month after burn-down to cut and bale their hay without experiencing any issues associated with spiderwort. It will take multiple cycles of regrowth and burn down to reduce the population in a field.  When feasible, hand removal is still the most effective control method.