The EPA recently approved the use of Zest herbicide for use in the Inzen Z ALS-tolerant grain sorghum system.  The following are some questions and answers from UGA Extension Weed Sceintist Dr. Eric Prostko that may be helpful to us:

Inzen Z herbicide-tolerant grain sorghum is sorghum that has been traditionally bred (i.e. NON-GMO) for resistance to certain ALS-inhibiting herbicides. This technology was originally developed by Kansas State University and licensed to both DuPont and Advanta Seeds. The resistance to these herbicides came from ALS-resistant shattercane, a close relative of sorghum.

2) What is Zest herbicide? 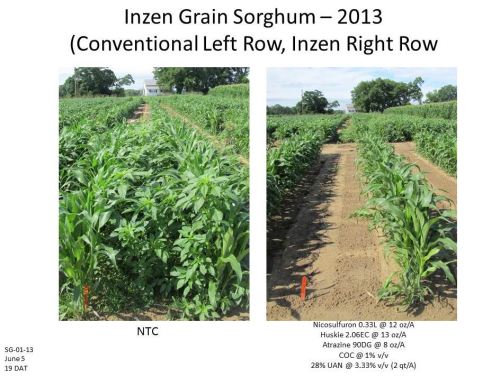 3) Has the Inzen Z herbicide-tolerant sorghum been tested system in Georgia?

Yes! UGA weed scientists have worked with this technology for several years.  When available, it will be very beneficial for grain sorghum growers who struggle with Texas millet/buffalograss control.  However, resistance management will be crucial to the long-term viability of this technology. Georgia growers will be encouraged to start clean, use a residual herbicide at planting (Dual or Warrant), tank-mix atrazine with the POST application of Zest (Figure 2), and rotate crops. 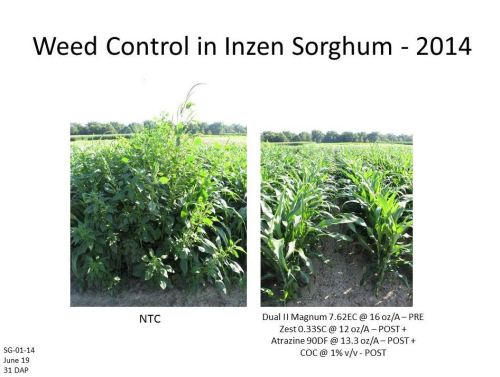 Since Georgia is not a leading producer of grain sorghum (only 50,000 acres planted in 2015). I expect our growers will be on the end of the list in terms of getting hybrids that are well-adapted to our region.  In 2016, Advanta (Alta Seeds) is scheduled to release one Inzen Z hybrid to a small group of growers in Kansas and Texas.  In 2017, Advanta hopes to launch an additional two Inzen Z hybrids. Pioneer will potentially launch in 2018.