Cotton is past third week of bloom in many fields, and I have been noticing leaf spots. Some leaf spots we will see but not cause a major issue and we do not have to spray. 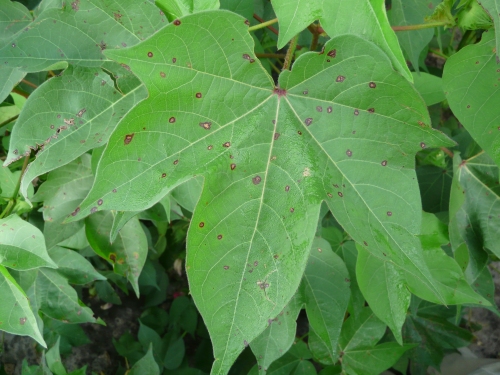 I’m seeing stemphyllium in most fields. Some fields are worse were we have lost potassium. In this field, it was previously in pine trees and fertility is low. The underlying cause of this disease is result of deficiency in potassium in the plant. The spots have an ashy-gray centers with a dark purple margin. Sometimes the spots detatch from the leaf giving a “shot hole” appearance. UGA recommends put out all potassium preplant on Piedmont, Coastal Plain, and Deep Sand soils. Split applications of K have not proven to be effective on Tifton type soils. However, foliar K has shown yield difference. UGA Extension Fertility Scientist Dr. Glen Harris says “foliar K applications should automatically be considered on deep sands, low K soils, high Mg soils, high-yield conditions, short season varieties and especially, where severe K deficiencies and leafspots have been observed.” Because this disease is associated with nutrient deficiencies, fungicides are not considered to effective control. 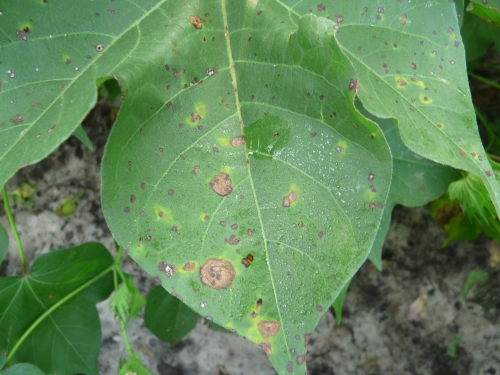 This is angular leaf spot I observed today, which is a bacterial pathogen (Xanthomonas). The lesions or spots on these leaves are more defined by the veins on the leaf, creating an “aungular’ appearance.  UGA Extension Pathologist Dr. Kemerait says As the lesion develops, it can take on an appearance more like target spot but is typically differentiated from target spot because of a yellow halo around the spot and because the initial water-soaked lesion is still discernible in the larger lesion. We have not seen a major outbreak in many years but are seeing it more frequently this year. It is most common after periods of rainfall. Since this is a bacterial pathogen, the use of fungicides is not considered effective control. 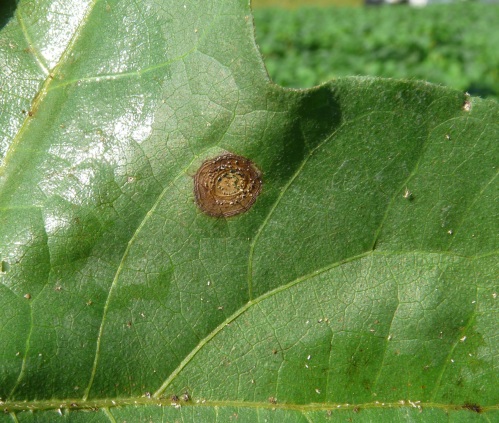 We may see these spots show up low in the canopy as cotton becomes more rank in growth. I have not seen any yet, but has been reported in Mitchell County. Target spot (Corynespora) is easily identified by the marble-size spots on a leaf that demonstrate a patter of concentric rings. Infection and defoliation typically begin on the lower part of the plant and move up. We can see significant defoliation with lesions found on boll bracts or bolls themselves. Fungicides have been shown to aide in the management of this disease.

Below is information on applying fungicides for target spot from the 2015 UGA Cotton Handbook:

One response to “Cotton Leaf Spots”