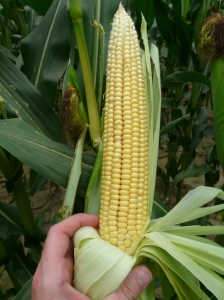 Here is dryland corn in Pavo that does look good. We’ve had more rain on the east side of the county. This corn is in the early milk stage (R3) of growth. Plants defined as R3 have kernels with a “milky” interior and explode easily when a kernel is mashed.

We were looking for southern rust.  Southern rust overwinters on corn in Mexico, Caribbean and Central America. Rust has not been found much since the location in Mitchell County two weeks ago. This could be because of not having tropical storms yet, and corn that is being protected with fungicide. This is helping us stay ahead of rust in 2015 unlike last year. Still, we need to be alert after the find of southern rust. We do have increase chance of rain next week and warm temperatures which is more conducive for disease.

What Stage of Growth is Corn Safe?

Much of the corn crop though, is silking to early ear development (R2/R3) which adds roughly 2 to 3 weeks of time to our potential spraying. UGA Extension Pathologist Dr. Bob Kemerait and Agronomist Dr. Dewey Lee say that a crop is likely to benefit from protection from southern rust until the ears reach the hard dough (R4) growth stage. Southern rust is less likely to adversely affect the cron crop if it occurs after the corn has reached the dough stage. Here is a blog post from Mitchell County Agent Andy Shirley of Corn Denting.