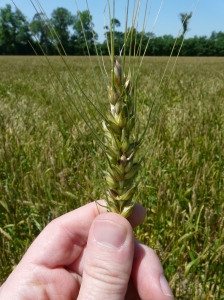 Here is a field in the northwest part of the county that is getting close to harvest. This field started with a less desirable stand, but you wouldn’t notice now. It is at milk stage progressing towards Feekes 11.3 where the kernel is hardening. There was a fungicide applied at heading, which has helped with disease. Rain in this part of the county is also much less than average, so this helps when disease is present.

Here is a brown stink bug on a head.  Sometimes wheat is infested with stink bugs during grain fill. The brown and southern green stink bugs may reproduce and have a complete generation in wheat before harvest. However, according to UGA Extension Entomologist Dr. David Buntin, they almost never require control. As wheat dries down, stink bug adults disperse to nearby summer crops. We would only treat if 1 or more stink bugs per square foot are present at milk stage. Treatment is not needed in the dough stage.

However, when wheat harvest gets underway, we need to pay close attention to the corn crop as stinkbugs will move to corn. UGA Extension Agronomist Dr. Dewey Lee says this could be a problem particularly around VT/R1 stage.  Corn is very susceptible to stinkbug damage at this stage. Dr. Lee recommends applying an a labeled insecticide by airplane rather than through the pivot. 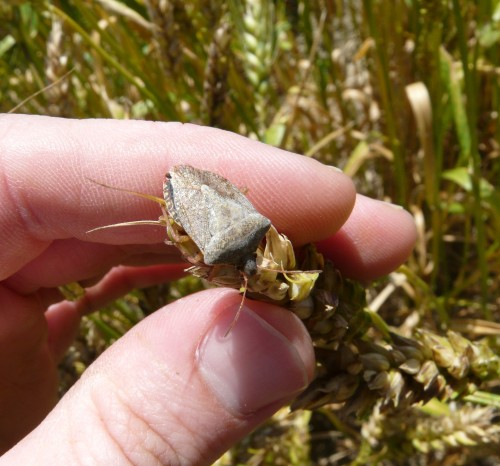 The last four weeks, I have answered lots of questions about fusarium head blight, stagonospora glume blotch, tan spot, rust and even the possibility of cold damage on pollen from frost and loss of pollination.  All of these are potential causes of yield and test weight losses in small grains.  The biggest ‘killer’ though is fusarium head blight (FHB)…It will produce a vomitoxin called deoxynivalenol, more commonly called DON which in high enough concentrations will cause the grain to be rejected from the market. Over the last two + weeks, I’ve received a lot of samples or pictures which have demonstrated widespread infection of FHB.  As I stop and look at fields, it is evident that FHB is the major cause of our problems and the yield loss appears to be substantial.  Additionally, rye, barley and triticale are also affected by the disease. 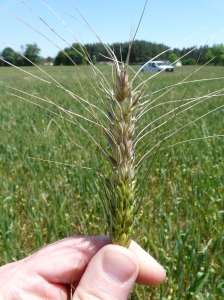 The wheat fields that I have visited appear to have a 50+% loss. it is easy to see the shriveled, affected grains. Upon separation, the shriveled grains accounted for 50 to 65 % of the total grain set on the heads.  In most cases, even where growers applied two fungicide applications, yield loss from FHB is still high. I had hoped that we got by without much infection, but rain saturated the fields that flowered earlier as well as those that were still flowering, leading to considerable infection rates. Unfortunately, we can’t spray by air when it’s raining, misty or foggy…..which is the time we see high rates of infection.  You may read that Prosario , Proline , and others listed as preferred fungicides however, they are not 100% effective and by some accounts only 60 to 70%.