Weeds are pests year round in pastures and hayfields. It is a struggle staying ahead of weeds with such a broadspectrum of species. Here is information by Miller County Ag Agent Brock Ward on two of the most common weed problems in Georgia:

First we will start with the thistle complex as it is often overlooked during the best time for control. Starting in mid-January through mid-March, producers should scout for the presence of thistles in the rosette stage of growth. This is the stage of growth where the plant is low to the ground and grows outward from its taproot as a mass of leaves just above the soil surface. It is easy to drive by a hayfield or pasture and not even suspect the presence of thistles.  The thistle complex consists of several different species but they are all treated as one complex.

Timing is the most critical element in the management. When in the rosette stage, chemical control of thistle is much better than if the plants are bolting, or growing taller from the center. Also it is even harder to kill a thistle once it has begun to flower. It is beneficial to attack thistles during the rosette stage as it is susceptible to a broader range of cost effective herbicides. 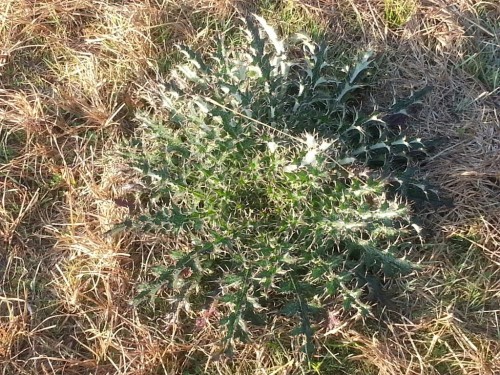 Dogfennel is also a weed that has substantial economic importance. Dogfennel can spread from its root stock causing larger groups that shade the desired forage and reducing yields. It is particularly troublesome in overgrazed pastures or areas where pH has drifted below desired levels for most grasses. Although dormant during the winter months, growth resumes and seed germinates as early as April and can grow to sizes that shade desirable forages in a few months.

Although they are easier to scout than thistles, dogfennel requires the same timely approach for adequate control. When less than 20 inches tall, dogfennels are much easier to control and producers have a broader range of herbicides from which to choose. After they exceed 20 inches in height, some of the more cost effective herbicides become less effective and a more costly herbicide may need to be used for adequate control.