We were out looking at some forages planted for grazing and hay yesterday. Here is some Nelson ryegrass drilled with Crimson clover into a dormant bermudagrass pasture. These fields are coming along well with little to no issues. With clover, the seed depth is so shallow, you basically just set the seed on the ground since settings are not that shallow. When broadcasting clover, seed depth is usually not an issue onto dormant warm season sod. If drilling, you have to make sure the seeds are not planted more than ¼ – ½ inches deep. Much of the clover is coming up but some is coming up in more spots than others.

The only issue so far is weeds. We have mostly chickweed, but also carolia geranium too. We wondered about a pest emergent herbicide, but since clover is still in seedling stage, UGA Extension Weed Scientist Dr. Patrick McCullough says no herbicides are safe enough on seedling clover. With such few options of herbicides on clover, we were worried about ryegrass. Dr. McCullough says ryegrass would be tolerant, but selective weed control with clover is difficult enough with established clover.

In another field oats has been planted for grazing. This field has been typical of some issues in the county this year. Planted around October 20th, we went through such a dry spell and had a hard time getting a stand. We wondered about fertility being an issue since oats are less tolerable to pH below 6.0 then rye. Even with grid soil sampling, you can see small spots of low pH. Those spots were not evident here, just bad stand. In the very coverer of the field, the stand is much better. It was clear that low spot is much wetter and seed was able to germinate. 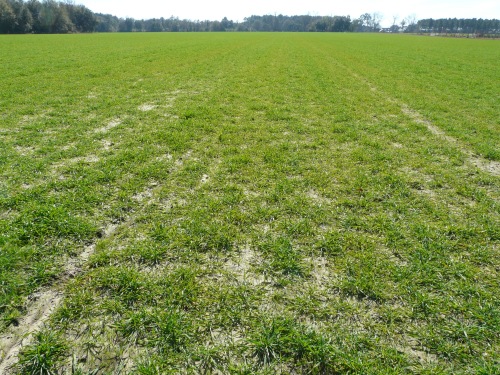