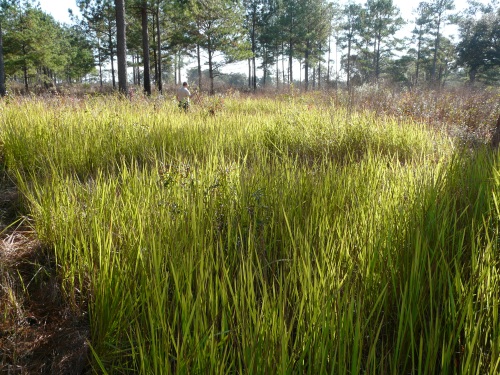 I was out with Wallace Reed on Seminole Plantation Friday where some cogongrass has been spotted. Today Mark McClure with the Georgia Forestry Commission came by to inspect for treatment. We’re looking a little over an acre of congongrass. As a highly invasive species, Cogongrass will outcompete native grasses and eliminate wildlife habitats. It is very dense and hardly anything grows within it. It spreads by rhizomes, and usually shows up in a circular infestation. On this plantation, it is easy to see where it started and was spread by equipment. You could also notice the grass stopping along the edges where firebreaks were plowed.

There are actually two varieties. This is the taller variety that is less common. The shorter variety tends to fall over at the end of the season. This one is still standing. Mark has seen this variety grow as tall six feet tall. 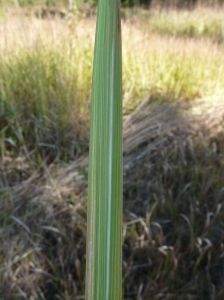 Midrib not centered on cogongrass.

You can identify it a few different ways. First, the midrib on the upper part of the leaf is off-center. Leaves edges are also very rough and tips pointed. The rhizomes are white, segmented and have a scaly appearance – like peeling an onion. The rhizomes are also very pointed. In a dense stand like this, you can place your hand on the ground and feel the sharp points. One of its biggest characteristics is the white, fluffy plume-like seed head it usually initiates in late spring. Occasionally, congongrass will initiate flowering once it is stressed (mowing, burning, freeze, etc.) Mark has seen its plumes in lower Thomas County as early as January, if temperatures are warm enough. 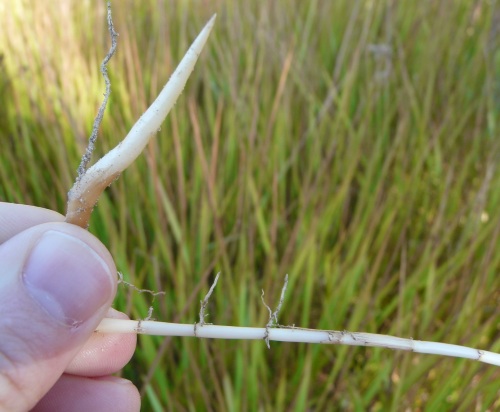 Rhizomes are whitish, branched, scaly and sharp at the tips.

Thomas County has probably had between 8 and 10 reports of cogongrass this year. Overall, there has been less reports sites in 2014 than in many years. The GA Forestry Commission has been doing a good job with control. Most of their treatments will include imazapyr, which has soil activity. When you get around hardwood trees, like the live oaks here, they will use glyphosate – no soil activity. Burning normally causes cogongrass to initiate flowers. Mark says its good if you can do the burn much later than normal, like (Mid-spring). There is no way to know how long its infested this area, but it’ll take a few years to clear it up completely.

A few good cogongrass resources are Cogongrass from NRCS and also information off the Invasive Plant Atlas – Cogongrass. 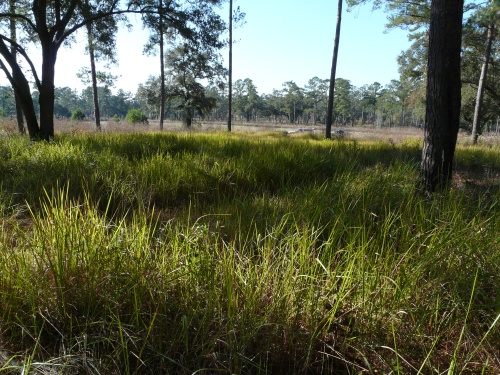