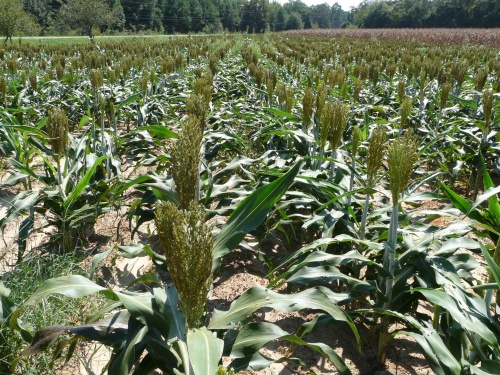 We were looking at sorghum yesterday and saw many, many aphids with a lot of honeydew on the lower leaves. Some sorghum is not producing heads just yet. The aphid turns out to be a new aphid in the state, white sugarcane aphid(Melanaphis sacchari). The initial problems found with these aphids in Texas were discovered during harvest, since the large amount of sticky honeydew produced by aphids choked combines and losing grain. UGA Extension Grain Etnomologist Dr. David Buntin says, “Subsequent reports find the aphid in 9 total counties in the southwest quadrant of the state Marion, Decatur, Early, Seminole, Colquitt, Taylor, Terrell, Randolph, and Tift counties.” (Now Thomas.) 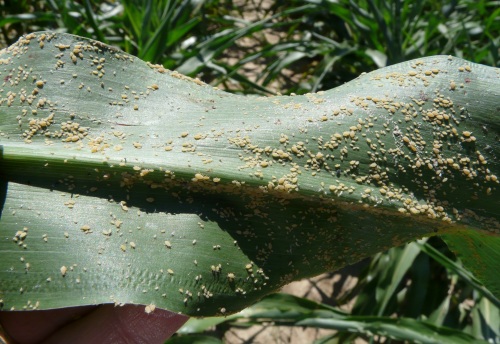 Here are some more notes by Dr. Buntin:

“The white sugarcane aphid (WSCA) has occurred in Florida since 1977 and Louisiana since 1989 feeding on sugarcane.  About 2 years ago the aphid shifted its host preference to grain and forage sorghums. First found in Texas, this new strain has rapidly spread eastward across the southern United States in 2014 and is now widespread in Mississippi, Louisiana, and eastern Texas, and Arkansas.  It is expected that WSCA will continue to spread rapidly throughout Georgia over the next few months.  It is important to scout sorghum fields in your area for its presence. It is fairly easy to identify.  Wingless forms are a uniform pale cream to yellow with black feet and black cornicles (the small tubes present on the end of the back). 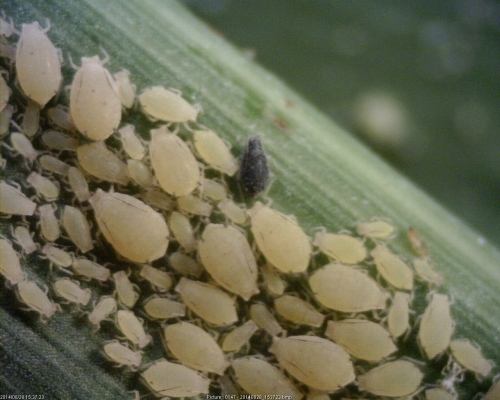 Where it has been found in Georgia, it is present in many fields at very high numbers of several thousand aphids per plant across entire fields. The aphid sucks plant fluid and these large populations are causing injury to the plants including death of leaves and sometimes plants. The aphid remains present in field until harvest. It produces large quantities of honeydew, a sticky sugary substance that adheres to the plants, which may interfere with harvest and may damage combine harvest equipment. Entomologist in Texas, Louisiana and Mississippi report 20 to 50 % yield loss and sometime the total loss of the crop from harvest damage.  A tentative threshold is: treat if more than 30% of plants are infested AND there is an average of 100 – 250 aphids per sorghum leaf.  This publication from Texas AgriLife Extension shows the different aphids on sorghum and information about white sugarcane aphid biology and damage: http://nueces.agrilife.org/files/2014/05/Sugarcane-Aphid-Publication.pdf   Interestingly, a study by Kathy Flanders at Auburn University suggests this new strain prefers sweet, grain and forage sorghum over sugarcane and it does not attack millets. 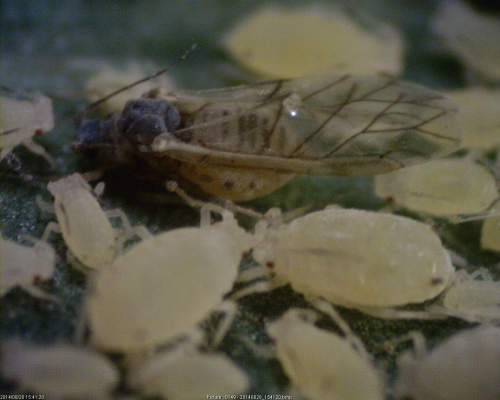 WSCA is difficult to control and populations may bounce back quickly following an application. Currently labeled insecticides in grain sorghum are not adequate.  High rates of Lorsban (24-32 oz) appear to provide decent control but cannot be used for late-season infestations because of the 60 day preharvest application restriction.  Dimethoate, malathion and the 1-pint rate of chlorpyrifos provide only about 50% control.  Pyrethroid insecticides are not effective and may flare aphids.  If headworms occur, consider using Belt or Prevathon for control.  The states of Texas, Louisiana, Mississippi, Arkansas and Oklahoma have a Section 18 (emergency use exception) exception approval to use Transform WG (sulfoxaflor, Dow AgroSciences).  Studies in these states show an application of 1.0 – 1.5 oz per acre is about 90% effective, although aphids can build back in a few weeks. We are working on a section 18 emergency use exception request for Georgia, but Transform WG is currently not allowed in Georgia.”

One response to “White Sugarcane Aphids”