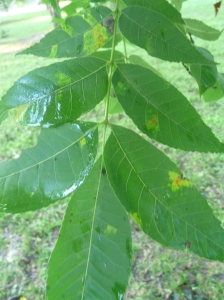 We’re seeing evidence of black aphids and mite damage on pecan leaves. Growers are spraying for both right now. August is a critical month for pecan production since the female flowers are induced. UGA Extension Horticulturalist Dr. Lenny Wells says while flower induction is driven primarily by the effect of crop load on the tree, additional stresses like drought, insects, disease, sunlight, etc. in August can significantly reduce the following year’s crop. The trees need to undergo as little stress as possible.

Many growers have already been spraying for black aphids. Schley, Sumner, Gloria Grande, and Oconee are more susceptible to black aphids and treat before levels build. Large populations usually build in August, Septemer or October. Feeding causes bright, yellow spots between the veins of the leaflets. The spots soon die and turn brown. A few dead areas can cause a leaf to shed, and we are seeing leaves shed with black aphid damage (left). 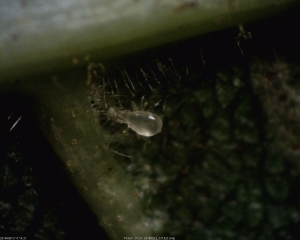 We’re also seeing damage from mites. Dr. Lenny Wells says, “Mites (right) are a little tougher to know when to pull the trigger on. They can be found in the orchard throughout much of the year and normally don’t reach population levels that do harm. The trees can tolerate them to a point. But, like certain diseases that lay in wait until the right conditions are found. When it gets hot and dry in late July/August and you see a strong mite population on the leaves, they can explode rapidly as black aphids, causing severe scorching and defoliation. This normally occurs following a spray with a broad spectrum insecticide but it’s not always the case. I have seen this in orchards where no broad spectrum insecticides were used. Therefore, growers should be vigilant of mites and watch for signs of early scorching which begins along the midrib of the leaflets. Miticides are expensive so we want to be sure that there are mites present before spraying. There are many things out there that can scorch leaves and a grower can waste a lot of money spraying scorched leaves rather than mites.”